On 16 April 2019, the Ministers of Culture and their representatives gathered in Bucharest, Romania, for an informal meeting within the framework of the Romanian Presidency of the Council of the European Union. The meeting was held to develop the potential of the cultural and creative sectors and to keep these at the heart of the political agenda in the years to come.

The meeting addressed two topics: “Financing and innovation for the cultural and creative sectors” and “Learning from the past, building our future: Europe’s cultural heritage in the spotlight”. The outcomes of the meeting were summarized in the “Bucharest Declaration of the Ministers of Culture and their representatives on the role of culture in building Europe’s future”.

In the declaration, the ministers highlight the fact that important steps have been taken to place culture higher than ever before on the EU political agenda. They believe that it would be vital to continue this approach, by taking further steps. In this context, the ministers confirm their intention to continue mainstreaming culture in other relevant EU policies. The ministers also state that culture effectively can contribute to the EU’s efforts to implement the UN 2030 Agenda Sustainable Development Goals.

NEMO has co-signed a statement by Culture Action Europe calling for giving culture a central place in the proposed EU long-term... 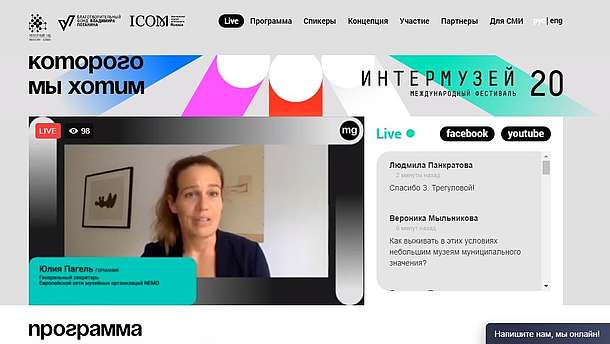 NEMO was invited to join the panel “Museums and the Future We Want”, which took place online on 26 May 2020. The panel was part of the Russian “International Forum Museum Guide” and focused on museums and sustainable development...

NEMO spoke at a European web conference on the value and use of 3D digital...

On 27 May 2020, NEMO was invited to speak at the online conference “3D digital cultural heritage for resilience, recovery and...